This is the 958 Cook it’s a 1965 Rodebaugh crossed to 2195 Theil!! This pumpkin was 3% heavy and the Theil was 11% heavy, most of the 1965’s was 10-12% heavy so these genes are heavy heavy genes with a beautiful orange color!! It did win the Howard Dill Award and was also named for one of the Prettiest Pumpkins in the World!! The plant was roughly 200 sqft so relatively small plant but the plant was one of the best ones I’ve ever grown in terms of training the vines and being open for air flow without a ton of tertiaries needing pruned! 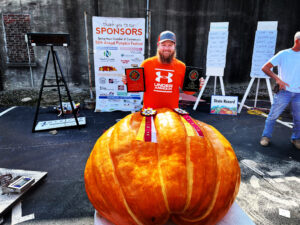